A visitor holds a sign welcoming Supreme Court Associate Ketanji Brown Jackson following her being sworn in to the US Supreme Court in Washington, D.C., US, on Thursday, June 30, 2022.
Photographer: Al Drago/Bloomberg

The US Supreme Court moved boldly in its first full term with three appointees, delivering far-reaching rulings on guns, religion and federal regulatory power along with a historic decision that eliminated the constitutional right to abortion.

It was a term laden with tumult: the unprecedented leak of a draft abortion opinion, signs of friction among the justices, an alleged assassination attempt, and public anger that culminated with protesters arrested outside a fenced-in court as the newest justice was inside being sworn in.

Along the way, the conservative-dominated court issued sweeping rulings likely to reverberate for decades. Even beyond abortion, the court established a tough new test for gun regulations, discarded a precedent that had limited government support for religion and curbed the power of federal agencies to tackle climate change, public health and other pressing national issues. 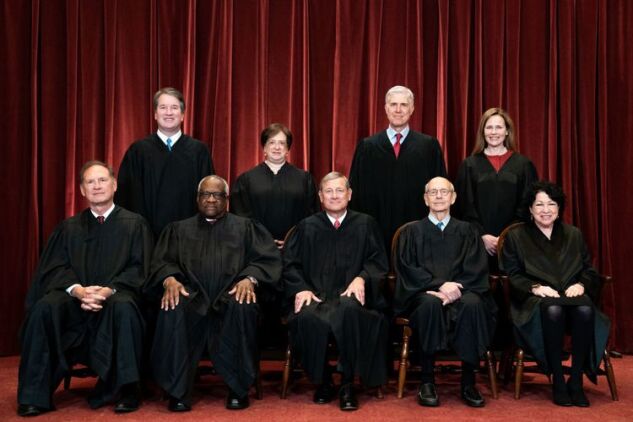 Justices of the US Supreme Court during a formal group photograph at the Supreme Court in Washington, on April 23, 2021.
Photographer: Erin Schaff/The New York Times/Bloomberg

“None of the decisions, taken individually, is particularly surprising, but taken together they represent an extraordinary shift in constitutional jurisprudence across a range of subjects,” said , a former Republican-appointed federal appeals court judge who now teaches at Stanford Law School.

The term underscored the impact of Trump’s three appointees -- Justices , and , who took her seat in October 2020, just after a new court term had begun. The group collectively swung the court’s balance in its biggest cases this term.

The bolstered conservative majority early when it let a Texas six-week abortion ban take effect Sept. 1. Three months later, the justices that Texas officials, by putting enforcement entirely in the hands of private parties, had all but insulated the law from review in the federal courts.

The ruling drew what would be the first of many dissents seeking to sound the alarm over what could be sweeping implications.

“This choice to shrink from Texas’ challenge to federal supremacy will have far-reaching repercussions,” Justice wrote. “I doubt the court, let alone the country, is prepared for them.”

The Texas abortion fight one was of several that grew out of the so-called shadow docket, the stream of emergency requests that has come to be a major portion of the high court’s work.

In another shadow-docket case, the court an Occupational Safety and Health Administration rule that would have required 80 million workers for private companies to get Covid-19 vaccines or periodic tests. The court said over three dissents that Congress hadn’t given OSHA a broad license to regulate public health.

Months later, the court invoked the OSHA decision in the ability of the Environmental Protection Agency’s power to reduce greenhouse-gas emissions from power plants. The ruling blocked President ’s administration from imposing the kind of sweeping climate-change plan the EPA tried to implement when was president.

Writing for the majority, Chief Justice invoked what he called the “major questions doctrine,” saying the court would require “clear congressional authorization” before letting an agency claim such broad power.

Dissenting Justice said the court, in establishing that rule, was creating a “get-out-of-text-free card” that would let the court ignore statutory language that didn’t align with its policy preferences.

Biden’s critics were quick to say the ruling would bolster efforts to thwart the administration.

The term took a dramatic turn on May 2, when Politico a draft majority opinion overturning Roe. That draft, written by Justice , proved to be authentic and formed the core of the court’s eventual , which could render abortion largely illegal in half the country.

The court quickly opened an internal investigation to try to identify the leaker -- a probe that so far hasn’t borne any public fruit. The leak also sparked protests around the country, including demonstrations outside the Washington-area homes of the conservative justices.

In early June, an armed man was outside Kavanaugh’s house and charged with attempted murder. The man allegedly told detectives he intended to murder Kavanaugh. 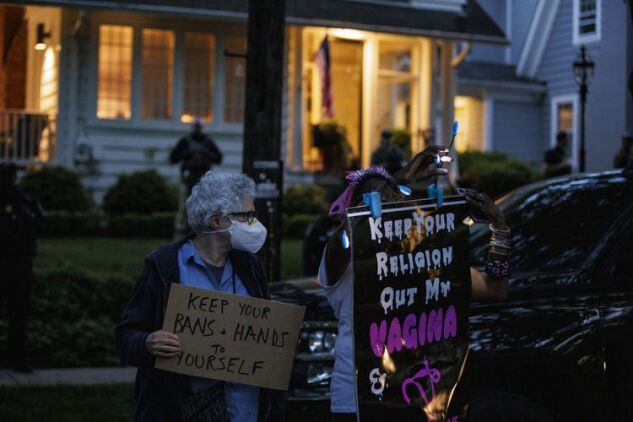 Demonstrators hold signs near the home of Brett Kavanaugh in Chevy Chase, Maryland, on May 11.
Photographer: Samuel Corum/Bloomberg

Conservative Justice said in May the leak had damaged trust among the justices.

“When you lose that trust, especially in the institution that I’m in, it changes the institution fundamentally,” he . “You begin to look over your shoulder. It’s like kind of an infidelity that you can explain it, but you can’t undo it.”

Thomas was separately mired in controversy amid revelations that his wife, conservative activist , was in contact with people driving Trump’s effort to overturn the 2020 election. The justice drew for not disqualifying himself from election-related cases, including one that let some of Trump’s papers be turned over to the congressional committee investigating the Jan. 6, 2021, attack on the Capitol.

The leaked abortion opinion proved to be a harbinger of groundbreaking decisions to come, including one that established a constitutional right to carry a handgun for self-defense. The jettisoned the interest-balancing tests lower courts had used to assess gun laws, replacing them with a “history and tradition” test that could prove far more difficult for firearm-safety advocates to meet. 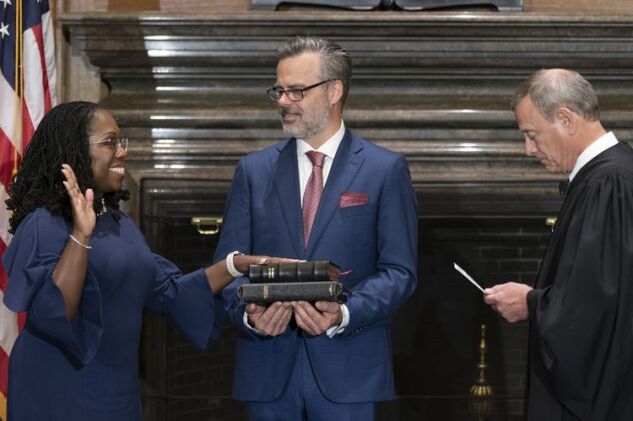 “What surprised me was that the Supreme Court moved far in several different areas at once,” said , a professor who teaches constitutional law at the University of Texas at Austin School of Law. After the abortion leak, “I had assumed since the court was taking this big plunge on one of the most monumental issues in American constitutional history that the court would go a little slower in some areas. So I expected a much narrower decision on the Second Amendment.”

The court was similarly assertive on religion. In for a public school football coach who repeatedly prayed on the 50-yard line after games, the majority declared the demise of a 1971 precedent, Lemon v. Kurtzman, that was designed to keep the government from promoting religion. Though conservatives had long criticized that ruling, the court had never explicitly it.

The EPA, gun, prayer and abortion rulings all were issued over an eight-day span as the court finished its term in rapid-fire fashion. The justices will in October with more high-stakes cases, including fights over affirmative action, and the of gay rights and free speech.

Less than two hours after the court’s final ruling Thursday, made history as the nation’s first Black female justice. Standing in the court’s West Conference Room with her family and most of her new colleagues, she took one of the two required oaths from the now-retired Justice , for whom she once clerked. 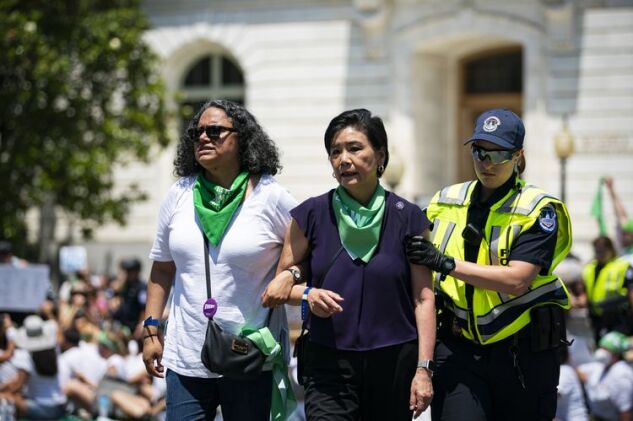 US Representative Judy Chu is arrested while blocking an intersection with abortion rights demonstrators near the US Supreme Court on June 30.
Photographer: Al Drago/Bloomberg

In keeping with the times, the ceremony took place as police were more than 180 people for blocking an intersection outside the court. Among the group was US Representative , a California Democrat who said the court’s abortion ruling was “already putting lives in danger.”

It was the kind of protest that Alito had said in advance wasn’t material to the court’s work.

“We do not pretend to know how our political system or society will respond to today’s decision overruling Roe,” Alito wrote in the abortion ruling. “And even if we could foresee what will happen, we would have no authority to let that knowledge influence our decision.”

To contact the reporter on this story:
in Washington at gstohr@bloomberg.net

To contact the editors responsible for this story:
at ewasserman2@bloomberg.net