Families with children live in tents in a Tijuana, Mexico, shelter for refugee migrants from Central and South American countries who are seeking asylum in the United States, in April 2022.
Photographer: Patrick T. Fallon/AFP via Getty Images

Immigrants’ rights advocates and Democratic lawmakers are calling for a quick end to the Trump-era Remain in Mexico program after the US Supreme Court sided with the Biden administration on efforts to end it.

The top court ruled 5-4 that the Department of Homeland Security didn’t violate federal immigration law when it decided last year to terminate the policy that forced asylum seekers at the southern border to wait in Mexico for months while their claims for protection in the US were pending.

The Supreme Court’s decision breaks a trend of repeated legal setbacks for the Biden administration’s immigration policies. The litigation now returns to a lower court to consider an expanded explanation that DHS offered for ending the Remain in Mexico program, formally known as the Migrant Protection Protocols.

DHS said it welcomes the Supreme Court’s decision and will terminate the program as soon as legally permissible. The agency tried to discourage any uptick in border arrivals, stressing in a statement that pandemic-related border restrictions known as Title 42 remain in place.

“There’s still a lot of questions left to be answered about what the termination will look like,” said Las Americas Immigrant Advocacy Center attorney Nicolas Palazzo, who represents asylum seekers enrolled in Remain in Mexico.

Palazzo and other advocates are pushing DHS to immediately end the program and allow the more than 4,000 migrants enrolled since late 2021 to enter the US while their claims are pending. 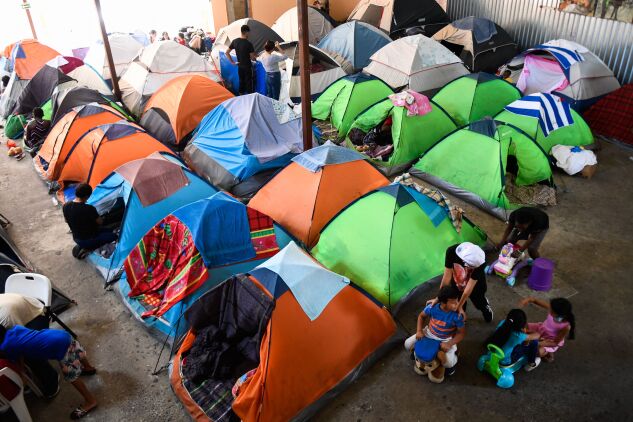 Children play as families live in tents in a Tijuana, Mexico, shelter with refugee migrants from Central and South American countries who are seeking asylum in the United States, in April 2022.
Photographer: Patrick T. Fallon/AFP via Getty Images

“The Biden administration must take the final steps to swiftly end this policy and establish a safe and humane asylum process,” Sen. (D-N.M.) said in a statement. “I plan to work with my colleagues on a bipartisan basis to continue my career-long push to fix our broken immigration system.”

Human rights advocates tracked more than 1,500 reported kidnappings or attacks on migrants forced to wait in squalid encampments during the earlier implementation of the Remain in Mexico program. DHS Secretary Alejandro Mayorkas has previously denounced the program’s “unjustifiable human costs.”

Republicans lamented the Supreme Court’s ruling as a step backward for border security, saying tools like Remain in Mexico are necessary to deter illegal crossings. Sen. (R-Fla.) said it would invite more people to try to cross the US-Mexico border, where US officials are already logging record migrant encounters.

“Today’s decision makes the border crisis worse. But it’s not the end,” Paxton said in a statement. “I’ll keep pressing forward and focus on securing the border and keeping our communities safe in the dozen other immigration suits I’m litigating in court.”

US Immigration Policy Dictated by GOP as Biden Thwarted in Court

Democrats say the administration and Congress should use the ruling’s momentum as an opportunity to both end Remain in Mexico and open other pathways for safe crossings at the US-Mexico border. The push for action comes days after more than 50 people believed to be undocumented migrants died in a tractor-trailer in the Texas heat.

“We must do more to prevent tragedies like what we saw unfold in San Antonio on Monday. Reinstating policies that bar access to asylum will only put more lives at risk,” Rep. (D-Calif.), head of the Congressional Hispanic Caucus, said in a statement. Ruiz called on Republicans to work with Democrats to advance comprehensive immigration legislation.

Bipartisan immigration talks began anew in the Senate this spring, but they’ve made little progress so far and face an uphill battle ahead of midterm elections this fall.

Some immigration policy analysts zeroed in on the Supreme Court’s discussion of parole for border-crossers as a pathway for the Biden administration to improve the asylum process without waiting for congressional action.

Chief Justice John Roberts, who penned the majority opinion, rejected the notion that DHS must either detain or turn away all border-crossers. A third option, which the federal government has used under various administrations, is offering temporary refuge in the US under a status called humanitarian parole.

Justice Brett Kavanaugh, in a concurrence, also highlighted parole as a permissible option for DHS to manage border-crossers when detention capacity is limited.

“If they don’t want to get into the situation of what to do with people who cross illegally, the easiest and most humane thing to do is to issue parole to people who are still in Mexico,” said David Bier, associate director of immigration studies at the libertarian-leaning Cato Institute.

“The fact that you had the court essentially siding with the administration goes to show that if red state AGs are banking on Trump-appointed judges to be able to enact their will,” he said, “it seems that the Supreme Court at least is signaling that, ‘We’re not going to rubber-stamp these lower court decisions.’”

To contact the reporter on this story: in Washington at egilmer@bloombergindustry.com

To contact the editors responsible for this story: at ayukhananov@bloombergindustry.com; at sbabbage@bgov.com