U.S. Labor Department leaders are planning to ramp up enforcement of wage standards on federally funded construction and service projects, aiming to reverse a recent trend that has been compounded by attrition of seasoned investigators, according to four sources briefed on the initiative.

The changes the DOL’s Wage and Hour Division is formulating—which could rank among its biggest initial policy moves under the new administration—would support the infrastructure and jobs package President is planning to roll out.

As the administration readies those big-ticket legislative proposals, which would increase government investment in projects developed by private companies, the department has begun preparations to expand its investigative capacity under two statutes that require government contractors to pay workers prevailing wages and benefits, as determined by the DOL.

The building trades and service unions have long called for the department to crack down on what they have described as government contractors’ persistent noncompliance with the two laws: the Davis-Bacon Act, which covers public construction projects, and the McNamara-O’Hara Service Contract Act, which applies to government spending on services, such as janitorial work and food preparation.

Those calls have intensified in recent years as the building trades lobby accused the Obama administration of putting Davis-Bacon on the back burner and, later, a Trump-appointed wage-hour chief placed new limits on regional offices’ authority to enforce government contracting laws.

The enforcement downturn became more pronounced during the Trump administration, when an exodus of veteran officials and investigators created a shortage of institutional knowledge about the complexities of requiring government contractors to pay workers prevailing wages and benefits—which the DOL establishes, consistent with what similar workers in the same geographic area receive.

The Wage and Hour Division’s strategy is still in an early planning stage, and details on possible components, such as staffing and dedicated funding, remain unclear, according to the sources, most of whom spoke on condition of anonymity because they weren’t authorized to share details of ongoing discussions.

“There’s no question that this administration is going to support significant infrastructure, and if that happens, much of that stuff is going to happen under DBA or SCA,” said Michael Hancock, a former WHD assistant administrator under President Barack Obama. “There’s going to be a ramp-up in the federal involvement of construction and the provision of services, and that argues that Wage and Hour is going to have to be ready with a plan on making sure there’s compliance.”

There is no guarantee Congress will pass infrastructure legislation, but it makes sense for DOL to get a jump start, given that it takes considerable time to train investigators, especially new hires, in enforcing government contracting statutes, Hancock said.

“They’re going to have to hire a lot of people, and they’ve already hired some retired people; they’ve re-employed them to do some training in government contracts,” said Irv Miljoner, who retired in 2019 as director of the WHD district office in Long Island, N.Y.

To be sure, the core of the division’s traditional enforcement mission in any administration is to ensure compliance with the Fair Labor Standards Act, which provides minimum wage and overtime protections and tends to benefit vulnerable, lower-wage workers to a greater degree than those subject to government contracting laws.

Still, the two government contracting laws have historically had high violation rates, with companies regularly misclassifying workers by including them in a lower-paying wage category, former wage-hour officials said.

And unlike under the FLSA, there is no private right to action under Davis-Bacon and the Service Contract Act, except in limited scenarios. Because private attorneys are unable in most cases to bring lawsuits on behalf of contractor employees who are owed wages, the enforcement onus falls on the Labor Department.

Boston Mayor Marty Walsh, who awaits a final Senate vote on his nomination to be U.S. labor secretary, pledged a renewed commitment to enforcing one of the two laws.

“I will do everything I can to make sure that Davis-Bacon’s enforced,” Walsh, a former construction union leader, said during his Feb. 4 confirmation hearing. “It’s also about protecting the American workers’ money, because it’s taxpayers’ money.”

Enforcement of the prevailing wage laws “remains a priority for the Wage and Hour Division, and one in which we are currently reviewing potential enhancements,” DOL spokesman Grant Vaught said in a prepared statement. “Our work in this area levels the playing field for all contractors and protects the hard-earned wages of American workers.”

Cheryl Stanton, President Donald Trump’s Wage and Hour administrator, eliminated the assistant administrator for government contracts position. The role, created during the Obama administration, had been responsible for nationwide management of the two laws. Stanton folded those responsibilities into two other offices.

Further, in September 2019, Stanton revoked regional administrators’ power to make final decisions to withhold funds from contractors after an investigation had determined they’d underpaid workers, according to a copy of an internal memo obtained by Bloomberg Law. Stanton had told WHD field offices that they’d need to get her personal approval before proceeding with this enforcement tool—in effect, adding an extra bureaucratic step.

Stanton, who took office in April 2019, was motivated to find new efficiencies and to get a better handle of agency operations, said a senior Trump DOL official. Her enforcement changes also had the effect of informing staff that the administrator took these issues seriously, the former official added.

The new policies were implemented at the tail end of a record-setting enforcement year for WHD, with back-wage recovery under all statutes totaling $322 million in fiscal 2019—well above the Obama-era high of $282 million. 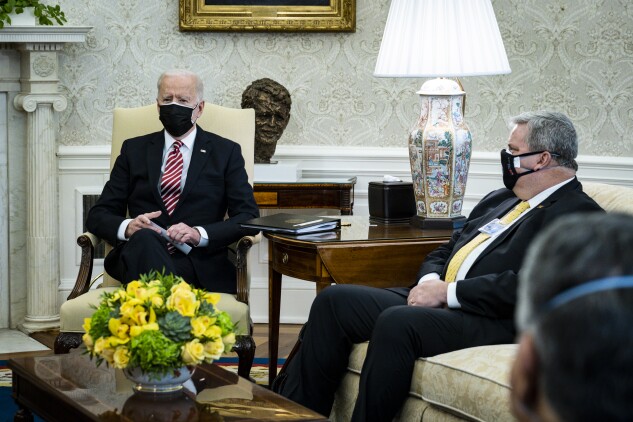 WHD also de-emphasized its government contracting portfolio by not replacing regional specialists on Davis-Bacon and Service Contract Act enforcement when they left the department, three sources with knowledge of the situation said. As a result, those positions, which also were instituted by the Obama administration, no longer exist in many WHD regional offices across the country.

“It is not uncommon for me to have to teach the investigator something and then get through to the regional director to try to get it fixed,” Atallah said. “Often, I have to go to the national office and try to work around, particularly if I have [an investigator] who doesn’t understand the nuance of the act.”

The WHD started to offset the staffing reductions by hiring at least 70 new investigators during the latter stages of the Trump administration. But the division’s overall headcount was at 794 investigators at the end of January 2021, DOL’s Vaught said. That’s down from more than 1,000 field enforcers employed during the Obama years.

The Biden administration’s enforcement emphasis aligns with the policy background of Jessica Looman, DOL’s acting wage and hour administrator. She was most recently executive director of the Minnesota Building and Construction Trades Council, giving her direct experience advocating for wage standards for construction workers.

The fact that enforcement and training has already become an elevated priority under Biden is encouraging to construction union presidents who recently met with Biden and Vice President Kamala Harris to discuss the infrastructure plan.

“We’re not out to cripple our contractors,” said Eric Dean, general president of the Iron Workers International Union, who attended the Feb. 17 meeting. “We just need a level of fairness on behalf of workers, and the Department of Labor using its enforcement mechanisms to enforce the existing standards is a welcomed sign.”

To contact the reporter on this story: in Washington at bpenn@bloomberglaw.com